Sitting there for hours

Granted, sometimes I’d really like to know what other people around are thinking about me.

If you want to get a good clip, you sometimes have to be patient. At trade fairs there are many hostesses, but it isn’t true that there is shoeplay heaven. Often I see women in their nylon pantyhoses, but they simply do nothing with their feet.

It is a bit of roulette, red or black? Do I stay or should I go to the next spot? In this case I noticed this pretty brown haired girl with her tan pantyhose and light grey flats standing at a game spot of a larger company. Her task was to animate people to test a racing game. 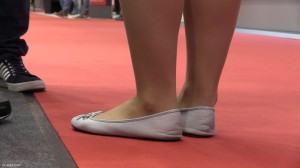 I watched her for a longer time following with two cameras. She was dipping and playing with her flats in the beginning, but when the place began to be crowded by a gazillion of young people, I decided to go and came back one hour later.

This time I simply sat down near the desk and was so brazen that I put my cams right to her direction without hiding at all. The lucky thing was that I met my best friend at this trade fair. He sat down beside me on the ground, so no one was even thinking about why there are two large cameras lying. 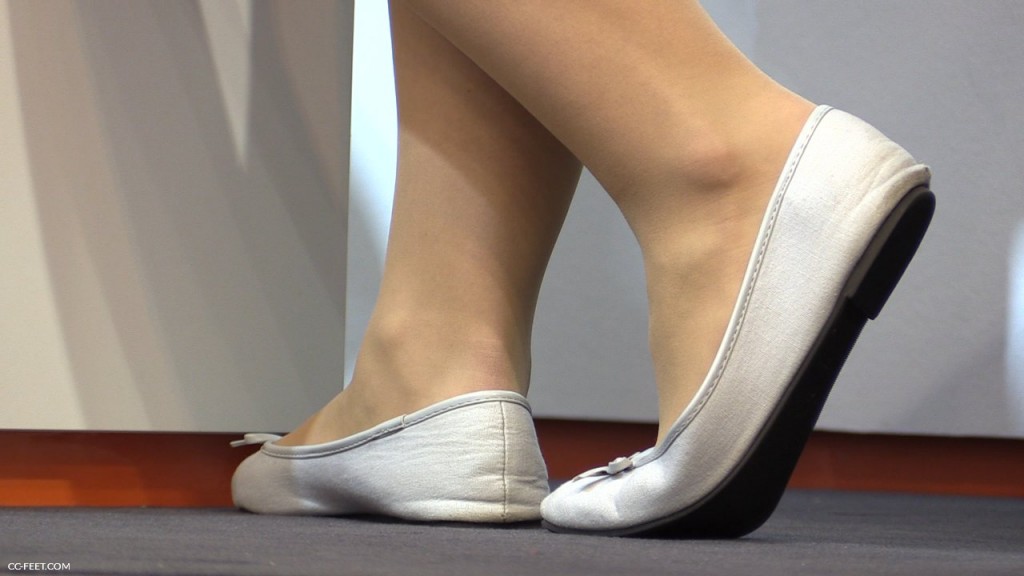 The girl was looking at us a few times, she even talked about us with her colleague, but yeah, sometimes the direct way is the most unobtrusive. 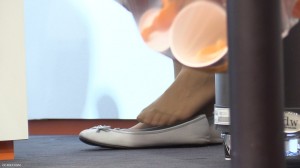 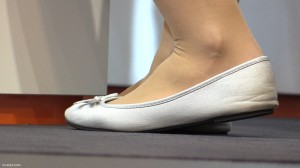 My patience was rewarded. The hostess started a wonderful shoeplay and foot rub scene. This was so unbelievable that I had to shut my friend’s mouth, because I really had to concentrate not shaking the cam due to my nervousness. 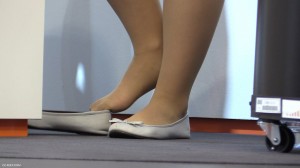 Side note: My best friend is one of the camera guys at my “Under Feet” projects at fussphantasie, so he knows what I’m doing for sure

Second side note: This was the same trade fair as in Heels And Tires. I was there for three days to get the most out of it.

Get the best scenes of this pretty hostess in nylons in a solid 12+ minutes clip.