I filmed more than 2 hours

This was a nice weekend with a very happy ending. I filled my veins with loads of coffee while capturing this blond girl in her black nylon pantyhose.

The clip here is actually a thriller in two ways. At first it was almost impossible for me to get a good viewing angle to record the heelpops the little girl did. She had a black skirt and a short jeans jacket on, long legs enclosed in thin nylons and nice trashed flats.

I tried a few positions to adjust my camera, but there were many chairs in my way. I whispered some WTFs and finally got a free seat when the girl left the scene to go to the toilet. This was better, I calmed down and watched her heelpopping and wiggling with her shoes.

After a while another table got free and I changed instantly, moving my coffee and everything two meters behind. Sometimes I’m asking myself what other people think about me when I’m doing such strange things 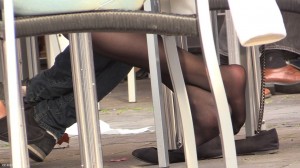 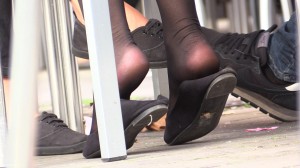 Anyway, now I had a free view to the girl’s feet and then started the second meaning of thriller. Not only she did some fine dangling with her flats which I liked very much, no, she eventually lost her flat and started to move her toes and sole around. 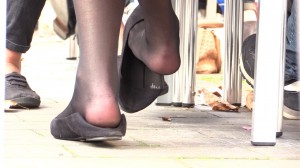 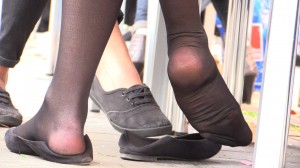 In the end she poked her girlfriend, who had black plimsoles with barefeet on, and they started an insane synchronous foot wiggle as if they were both doing an unbelievable foot job to an imaginary man lying under them. This made me really speechless.

This clip is more than 30 minutes long. It contains an arc of suspense from the calm beginning to an exciting explosion at the end. Enjoy mates!