This is what I call luck. I captured a socks and flats girl, but the group left the scene too early. Two hours later I saw them at another café again by accident.

As you know I am into socks and flats, can’t explain, but this blows my mind. It is a rarely seen combination and when you see it, you can expect some wonderful shoeplay.

At the first stop I filmed the flats from the front side. There was no real shoeplay, but some toe wiggle inside the shoes which was nice. The girl even pushed her feet on the ground a few times, but yes, I was a bit sad when they left. 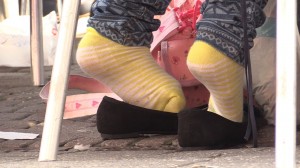 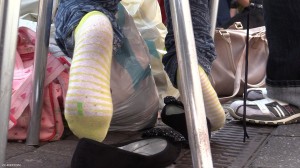 Hours later I couldn’t believe my eyes, because I saw lemon socks and I knew I have seen them before. Bingo! In the beginning it was a bit difficult to capture, but then I got a seat near the girl. 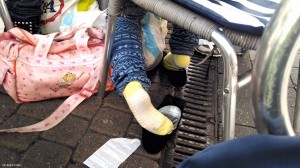 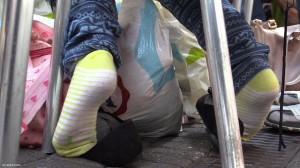 Her shoeplay was nice to see, I even pulled out my cell phone for a look inside those flats. As two people of the group were constantly looking at me, I managed to capture only a very small hair shot, but you won’t miss it in those 13+ minutes.