So, this is clip #111 and I had to choose a scene which comes up to that special number. Give a +1 for this heavenly nylon shoeplaying girl!

Short story beforehand: I saw that girl, assuming her in her mid 20ies, sitting with another woman at a café and saw her moccassin flats but no shoeplay at all, so I walked on by. Gladly I came back 10 minutes later, because then I saw her beautiful slightly dirty nyloned sole.

I grabbed a chair next to her immediately, one of my cameras was already running. As you know, I like to capture the scenes with different cams at once. This was not so easy this time, because the elder woman was sitting right in my view. Nevertheless I got many shots though, awesome ones, where you can right look into the girl’s flats. 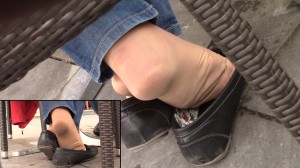 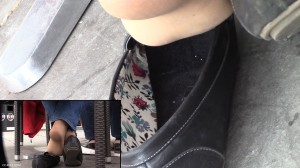 Often shoeplay scenes consist of some movements and that’s it. But this time I captured so many breathtaking moments of the girl, that there aren’t any minutes without moving. 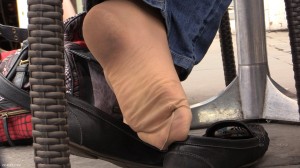 Either she wiggled heavily with her flats in the air, or she popped her feet out of the shoes, played with them, turned them around, just to push her dyed nylons in her flats again.

This was so thrilling that I really wished she would stop sometime, just because I needed to calm down for a moment… 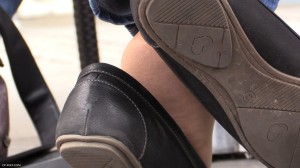 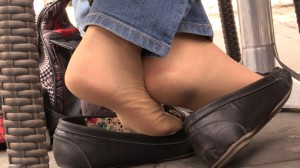 After some time the two women got a visit by another one. That was a good chance to change my point of view a little bit, so I moved to the side. And man, this was a very good idea, because the girl did some exciting shoeplay again. All that with the most possible detail, so you can count her stitches of her nylons.

Now, why is this clip “only” 32+ minutes long? Simple explanation: Both batteries of my cams died. In fact I had another one for the large cam with me, but I already captured over 90 mins of material, so I decided to go and walk away with the most satisfied feelings I could have had. This was a beautiful day